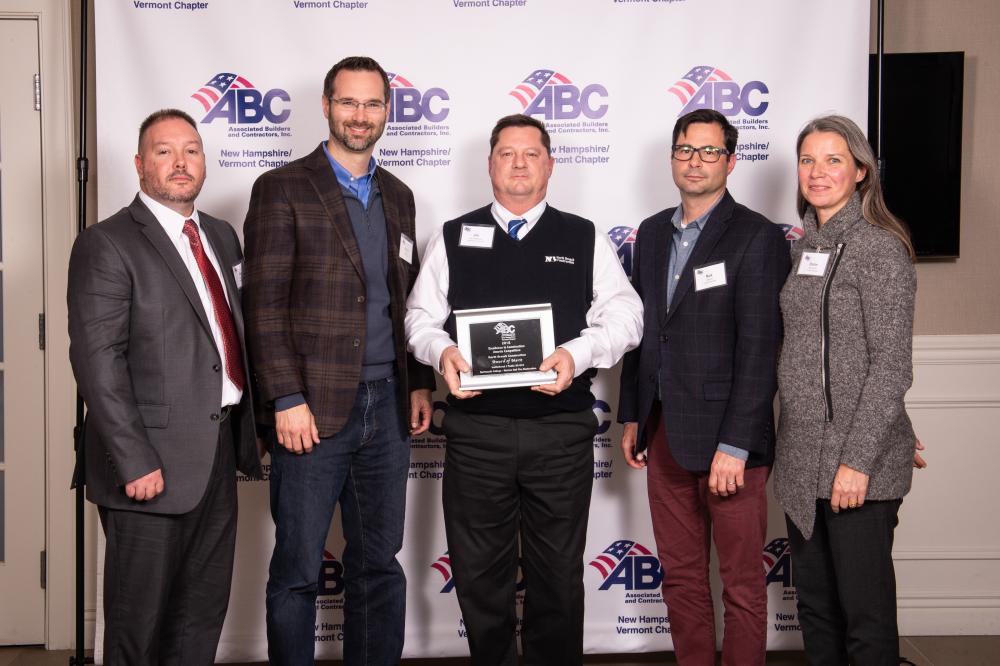 The firm was honored to receive a Merit Award for the fire reconstruction of the Morton Hall dormitory on the campus of Dartmouth College in the ‘Institutional/Public $5-10M’ category. Dartmouth College’s Patrick O’Hern and Chris Johnson, along with Project Architects Sharon Ames and Mark Lee of Harriman Associates, joined North Branch Construction’s Project Manager Jim Schwartzkopf on stage as Schwartzkopf accepted the award.

The unexpected fire at Dartmouth College’s Morton Hall took place during the solicitation process for proposals from Construction Managers to perform minor renovations-in-kind and systems upgrades to several dormitories in the East Wheelock Dorm Cluster over a period of three summers. The fire was one of the most difficult to extinguish that the Hanover Fire Chief had ever witnessed, and caused extensive damage to the building.

The original systems upgrades and minor renovation scope of work was revised at once to include demolition of the destroyed portions of the building. North Branch Construction was hired immediately upon completion of the initial demolition, and within 24 hours had a temporary heating system in place to begin drying out the building as well as to keep warm the main water, steam, and sprinkler lines that ran below Morton Hall and were still providing service to other dormitories. The initial demolition brought to light that the building was beyond repair to perform the originally-planned 30% renovation-in-kind and systems upgrades. The entire building would have to be gutted and brought up to code. The College decided at this time that they wanted to take this opportunity to incorporate a new layout within the dormitory to allow for more social spaces and beds for students.

This new layout required a total redesign by Harriman Associates for the renovation of the entire building, including the removal of all existing mechanical and electrical systems and walls. This series of scope revisions and redesign turned what was originally estimated as a $1.5 million dollar project into over $6 million in work. Despite the Morton Hall renovation ending as a completely different project than when it first began, North Branch Construction was still able to complete the project on time for students to move into the dormitory mid-August, before the start of the 2017-2018 academic year.