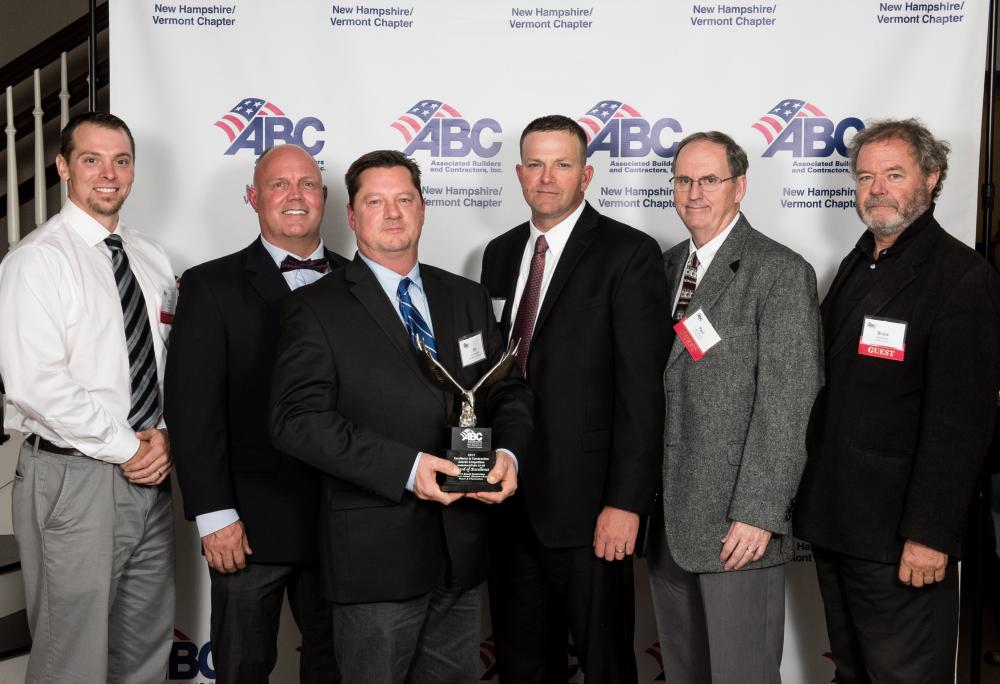 The firm was honored to receive an Excellence in Construction Award for the Phase I and Phase II renovations of the Ohrstrom Library on the campus of St. Paul’s School in the ‘Institutional/Public $2-5M’ category. St. Paul’s School’s Ben Jorgensen, Paul Lachance, and Joe Jackson, along with Project Architect Bruce Wood of KMW Architects, joined North Branch Construction’s Project Manager Jim Schwartzkopf and Phase II Project Superintendent Tom Knott on stage as Knott accepted the award.

The Ohrstrom Library, a landmark building on the St. Paul’s School campus, was originally designed in the early 1990s by Robert A. M. Stern, one of the most prominent American architects of the 20th century. Phase I of the project involved the renovation of the lowest level of the library, converting a computer lab and compact shelving storage area into the Center for Advanced Teaching and Learning (CATL). The CATL includes an experimental classroom and lab, offices, and a conference room. The classroom and lab feature floor-to-ceiling white board walls with interactive short throw projectors. Phase I of the renovation also included the installation of sliding and swing glass and oak doors. Installation of these floor-to-ceiling doors involved critical dimensions requiring laser-sharp precision and attention to detail.

The library’s interior features an elaborate, winding ceremonial staircase with intricate wood paneling, slate flooring, custom metal light fixtures, and hand-hammered wrought iron and hand-carved oak railings. Phase II of the renovation extended this staircase into the lower level of the library. In order to accomplish an exact match of the original Robert A. M. Stern design, all materials used on the ceremonial staircase were hand-crafted by local artisans—no ‘ready-to-install’ materials would do. This included the hand-carved oak and hand-hammered iron railings, hand-built wall panels, custom light fixtures, and quarried slate flooring. Achieving this level of craftsmanship in very little time was made possible by the exceptional subcontractors who performed these tasks: Multi-Weld Services, W. S. Dennison Cabinets, and Capital Tile & Marble.

North Branch Construction also utilized their own in-house carpentry and labor force for this project. Notably, carpenter Randy Jamieson was responsible for the floor-to-ceiling glass doors in the CATL. As the last major project of his thirty-two-year career at North Branch Construction, now-retired carpenter Darrell Wing re-created a seven-layer soffit in the ceiling cove of the library’s main lobby.

The level of skill, technique, and attention to detail that went into this project by North Branch Construction and all of their subcontractors was essential in honoring the prestige and beauty of the original library. This was a project that all involved can be very proud to have been a part of.